So, Magicka. What is it?

Well despite looking like an old school action RPG it really isn’t. There is nothing in the way of the normal loot of RPGs and your character has all the power you need to complete the game when you finish the tutorial, the only thing you pick up along the way are additional Magicks (more on these later) and replacements for your weapon and staff which add small bonuses but nothing really game changing compared to your awesome power.

END_OF_DOCUMENT_TOKEN_TO_BE_REPLACED

The game was first released on Xbox Live Summer of Arcade in August 2010 and is now being released via Steam on PC on 17th January 2011.

It is currently in Beta, which you can get access to by pre-purchasing the game (for a reduced price of £8.99, down from £9.99). And the beta is pretty much finished.

One thing I must point out, is how much the game is being compared to Team Fortress 2 (TF2), which it should be really. Both games are (1) shooters, (2) funny cartoon-ee graphics, and (3) awesome! But surprisingly, MNC has the edge with the class abilities, though they are a bit repetitive between classes, but make a big difference to the game-play. And of course, the storyline – if I can call it that – of MNC is excellent and gives the game purpose. END_OF_DOCUMENT_TOKEN_TO_BE_REPLACED 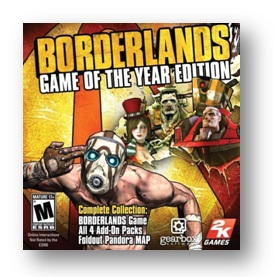 Borderlands was developed by Gearbox Software and was first announced in 2007, to be released in 2009 for the PC, 360 and PS3. I was annoyed at release, because they delayed the PC version so they could improve the graphics further beyond the console-counterparts but it turned out to be an excellent game that has sucked up many of my hours.