Handheld Consoles Are Not Falling to Phones

Smart phones may be a big market, but they are nowhere close to bringing down Nintendo and Sony’s handheld consoles.

END_OF_DOCUMENT_TOKEN_TO_BE_REPLACED

Steam users will be able to log into the application, currently in an invite only Closed Beta, and chat to their friends on the go, browse community groups and user profiles, view screenshots and other generated content for their favourite games, read the latest gaming news, view Steam deals and more.  Hopefully this means no more missing out on Steam deals whilst away from the PC. END_OF_DOCUMENT_TOKEN_TO_BE_REPLACED

This post brought to you by LG DoublePlay™. All opinions are 100% mine.

The cellphone industry is an ever expanding marketplace that is constantly rolling out new technology as soon as it becomes available. It should come as no surprise that LG is once again leading the way with innovation with the LG DoublePlay™ . END_OF_DOCUMENT_TOKEN_TO_BE_REPLACED

No HTC Phones for America next year?

In another blow for it’s competition, and common sense, Apple have successfully filed a patent claim against HTC. The ruling states that HTC have until April 19, 2012 next year to modify their software or their phones will no longer be able to be sold within the United States.
END_OF_DOCUMENT_TOKEN_TO_BE_REPLACED 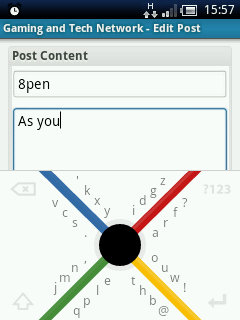 As you might know from my article on the subject I have a physical keyboard on my Android phone, this was something I insisted on when I bought it as typeing on a touchscreen, as we all know, is a pain.

Well 3qubits have tried to change that by designing a new input method aimed at mobile devices. The 8pen.

The best way to understand the 8pen is to have a look at the video on their site, it takes the basc concept from Swype that you don’t lift your finger during a word but takes it further with a system that is based on gestures rather than the absolute position of the keys.

It takes a lot of getting used to, I am still slower on this than I am on the default keyboard after a week of use and much slower than on the physical keyboard, but I am getting faster so who knows? With a bit of practice I might not be insisting on a slide out QWERTY for my next phone.

8pen is available for free in the Android Market.

I apologise for the lateness of this article, the weather looked like it was going to be nice over the Easter weekend (and it was wasn’t it!) so I took a trip down to Devon. Anyway, AJ, Akardo and I all went to The Gadget Show Live at the NEC this year.

This is my take.
END_OF_DOCUMENT_TOKEN_TO_BE_REPLACED

As part of my test I am writing this on my X10 Mini Pro using the WordPress application which is free in the Android Marketplace, Due to the lack of spell checker in this software I apologise for what will likely be a larger than usual number of mistakes.

So finally after 18 months Three have let me upgrade to a new phone, the Sony Ericsson X10 Mini Pro. But is it any good?

The Mini Pro is an Android smartphone, but unlike a lot of others it isn’t defined by it’s screen size. Where other manufactures have been competing by making phones with larger and larger touchscreens Sony Ericsson have made a compact Android phone instead. END_OF_DOCUMENT_TOKEN_TO_BE_REPLACED