This is a re-post of an article I wrote on my own blog back in April 09, being a retro piece it is almost as relevant today as it was then and I have tweaked it here and there to take account of a few changes of the last couple of years – Jon

In these days of 5 hour installs, limited activations and games that crash every ten minutes it is nice to go back and play some old classics to remind you just how good PC gaming was [1]. Some hold up very well to the test of time and some don’t, Re-Volt is one of the former.

The developers, Acclaim, went bust in 2004 and though the rights to Re-Volt IP were bought by Throwback Entertainment it is no longer in print and is available on Abandonia.com, the legality of this I am unsure about, you can still buy the game second hand but I have not seen it new anywhere. Sadly this version (Abandonia) will not have the brilliant music as the game used CD audio, unfortunately it is also impossible to get the music to work in Vista or Windows 7 (as far as I can tell anyway) even if you own the CD, as to get the game running at all you need to use the noCD patch which disables the music. More on getting it to work in Vista (and XP) later though.

Re-Volt is a racing game, one of the many that uses RC cars as its theme, and I think it is also one of the best. Graphically it looked good for its day and, now you have the computing power to stick the resolution up to extreme levels and turn on FSAA it still looks good, the textures are the only thing that let it down but most of the time you will be going so fast you won’t really notice.

My favourite thing about this game is the physics engine, it is brilliant. It did get a lot of complaints, but I think these people must have forgotten that it is meant to handle like a RC car rather than a full size one. If you pick the hardest skill setting, simulation (full speed, realistic collision), and I would recommend you do if you want to get the most fun out of this game, then every corner must be taken with care lest you spin out or flip the car over. I think people might have found this a bit harsh, particularly as this was released in 1999, when a lot of racing games still let you bounce off the edges to the end of the course if you held down go. Once you get the hang of the handling you can fly round the tracks, you know the speed you can carry into a corner and you know when to accelerate out again. To the people who say the physics in this game are bad: I own an 1:16 scale electric RC car capable of nearly 40mph, much like some of the cars featured in Re-Volt, if you try and turn a corner at that speed you will crash it [2]. An analogue controller of some sort is a must, you just can’t make some of the fine adjustments needed using the keyboard. 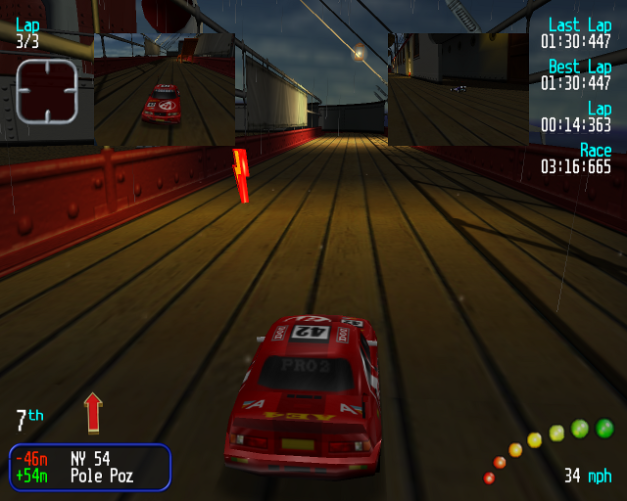 There is no damage model in this game and it is probably just as well. Mario Kart style pick-ups litter the tracks, collect one and you get a weapon or power up. These range from fireworks and EM pulses to Oil Slicks and improved batteries [3] and can add quite a lot of additional tactics to a race, the battery for example can simply be used to increase the speed of your car 10% or it can make you start again instantly after being hit by the EMP rather than having to wait like everyone else. All the weapons have appropriate physics effects, the Oil slick is calculated per wheel rather than just putting you into a spin like the bananas on Mario Kart, it is that sort of attention to detail that makes me love this game.

You race in a huge variety or locations from the slippery marble floors of a museum and the ice of a supermarket freezer to the tarmac of a suburban neighbourhood and the deck of a ship (which rocks quite a lot on the second version of this track). The surfaces are all different to race on and most tracks have several, again all calculated per wheel for that added effect. The game itself follows the usual, win races/championships/time trials to unlock more races/championships/faster cars but there are some more unusual game modes hidden away, clockwork carnage is a race against 50, yes that is right, 50 clockwork cars (even smaller than the RC cars). This is unlocked by completing the Stunt Arena, a game mode where you have to collect all the stars around a skate park like area, this is harder than it sounds as some of the stars can only be reached by cars unlocked later on in the game.

For all the screaming and shouting when Vista came out about compatibility it generally isn’t that bad, Re-Volt is the one of the few I have had real problems with, and it turned out to be mainly down to poorly documented command line switches. XP was probably worse when that came out and the compatibility mode never really worked. To get old games working can be difficult, but if the game was popular enough you can be sure that someone worked out how to do it.

Re-Volt on XP is nice and easy, Acclaim wrote a patch to fix the error. All you need to do is download and install Re-Volt 1207 and it will run on XP [4]. Newer operating systems like Vista or Windows 7 however are a slightly different story. In order to get it to run I first installed 1207 then I put revolt to run in compatibility mode for 98/Me, finally you need to run Re-Volt from a shortcut with the -sli (lower case is important) command line switch. If you are still having trouble getting it to run or have other issues check out this forum post which goes into more detail.

So you have Re-Volt running and now you want to make it look even better? As well as setting all the options to maximum in game there are a few other things you can do now you have the hardware. AMD have something similar for their graphics cards, but I am not familiar with catalyst so I can not tell you how do do this, it should be close enough, but if you have a NVidia card you can force settings such as anti aliasing on using the control panel even though the game does not support them. Simply go to the “manage 3D settings” section, add revolt.exe to the list of programs, select “Override any application settings” and tweak to you hearts content.

Re-Volt still has quite a large multiplayer community, mostly French but nobody is perfect, re-volt house is a good place to start. It is a Gamespy type program specifically for organising Re-Volt Races. Want a race with me? Add me as a friend on Steam and I will try to set something up.

Ah, the revolt community, this brings me to something interesting, custom tracks. I don’t mean the LEGO tracks that you can make with the track editor that ships with the game, community members have made tracks that are as detailed as the originals, extending the playability of the game hugely. I have not done this myself but the files you will need to do so can be found on the same site the 1207 patch was on. As well as the tracks there are also a huge number of custom cars available, some are just a paint job and tweaked settings and others are complete new models, there is even an RC plane available, though I have not tested that one. The parameters for each car are stored in a plain text file so it is easy to create your own tweaked car, things like friction engine power and steering rate are self explanatory but with other more mysterious settings there is a little bit of guesswork.

In conclusion Re-Volt is a brilliant game that I feel was mostly overlooked when it came out. There are still people playing it today so if you want some light hearted racing fun it could be the game for you.

[1] Or is it just those rose tinted glasses?
[2] I must admit I have not driven it on a ship or supermarket freezer so I don’t know what that would be like. Yet.
[3] Also works on the Nitro cars in the game but we will let them get away with that one, rule of fun and all.
[4] To get the Abandonia version to work, ignore the supplied crack and just patch to 1207 before running with the -sli switch.