Back in the day Mario Party was the most intense game you could pop into a system. When this superstar competition went down between friends blood was shed, fingers were lost in A button mashing and you might have lost your palm to rotating the joy stick as fast as possible. Over the years though the games have lost their charm, competition and everything that made them fun originally. So our only hope was that Mario Party 9 would be redeeming the series as we hope with every entry. Sadly though, this is not the case at all and actually the very opposite.

Mario Party 9 has the same premises as all it’s other entries, become the superstar! But in this game everything else you knew about the series has changed. Probably one of the biggest changes is that all maps are one way maps, unless you get a backwards dash space, and all characters are going through the map in the same kart. Because of this change mini games are completely random, I sometimes would only get to play about 8 mini games in an entire game and then the next game you might get thirty. I find that to be the biggest disappointment in the game because mini games made up almost all of the fun in the past Mario Party games so it is disappointing to see the focus on them go down. Also the sad things about mini games is that few are them are really as challenging as they used to be, the most fun I had while playing the game was during the boss mini games just because of how much more difficulty they emphasized. Boss battles are another new addition to the series and probably the best new thing added into the series, when the kart hits the middle of the course it stops at a castle very reminiscent of Super Mario Land that contains  a mini boss minigame in which all four characters must compete to take down the bosses health, this also happens at the end of the track. Most other mini games though, feel like the game has changed it’s aim to little kids as the mini games are simplistic as humanly possible and Toad has to walk you throughout every second of the game. 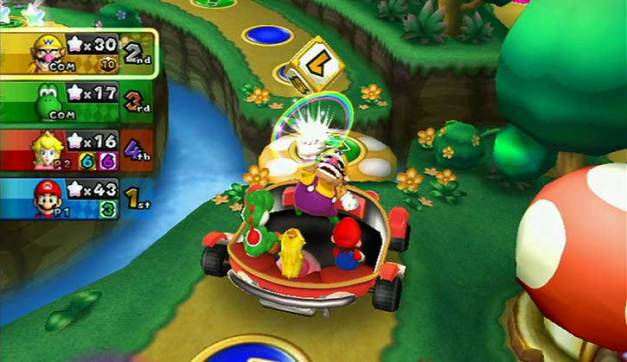 Also the goal of the game not is not to collect stars but to collect mini stars, and the game adds in a bit more random chance than the other games as you can only hope that you may run past these mini stars before anyone else, with the occasional help from a special dice block. With all of these things adding up together it seems like Mario Party has become a sad game for little kids to enjoy and it has no appeal to the adult crowd who may be looking for a more challenging game with friends.