On March 19th 2012 LudoCraft released Alpha 0.45 of their in-development multiplayer game, Air Buccaneers HD.  The update has primarily seen the game undergo heavy optimisation with some new features added in including two different friendly birds which sit on your shoulders (One for the Vikings and the other for the Buccaneers) and a shield on your back for paying customers. The full list is after the break: 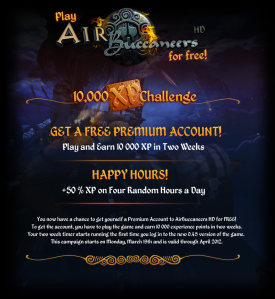 The Air Buccaneers HD team have also announced their 10,000 XP challenge, a new and unique campaign which sees players with free accounts able to redeem a free premium account for the game if they manage to gather 10,000 XP in two weeks.  This challenge starts when players log into the game for the first time after installing the latest version (0.45 onwards).  This campaign will be available throughout April 2012 with Happy Hours randomly occuring four times a day in which players will be able to gain a bonus of 50% to their XP earned in that hour.

The team have also sent across some stunning images of the latest version of the game, including some pretty nice shots of the new night map.  Check them out in the gallery below.