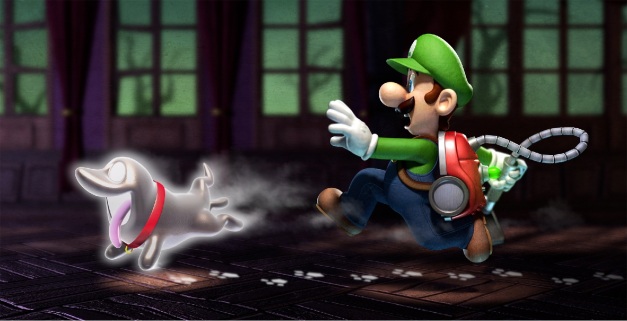 The floorboards creak, the windows quietly scream horror, the lighting crashes……AH! It’s a ghost! This is what Luigi goes through every night at his new job, a ghost hunter. It’s been a while since the brother has been in the spotlight, in fact it has been over 10 years but Luigi’s Mansion 2 is a great way to kick off the year of Luigi, the green capped brother should be proud.

Luigi’s Mansion: Dark Moon starts off with our hero lounging in his nice chair. Life has never been so peaceful, just flip on the telly, no need to deal with brother Mario, kick off the shoes and relax. If only it was that easy, because within seconds of turning on his show Luigi is sucked into his T.V. and into Evershade Valley where he finds his old colleague Professer E. Gadd! It turns out that after the events of the first game E. Gadd traveled to Evershade to do more research on paranormal activities and ghosts and actually became friends with many of them, but as of recently the ghosts have gone haywire! They are pulling pranks, smashing everything and running wild all throughout the valley! There is only one person who has the experience, bravery and moustachery who can handle this situation and it is the green capped crusader, Luigi!

Okay, Luigi actually isn’t the bravest character in all of the Mushroom Kingdom, in fact he is pretty scared of most of the things throughout Evershade Valley, but that is what makes the game so enjoyable! Instead of the darker, slight horror tone of the orginal Luigi’s Mansion, Dark Moon changes things up and replaces scary with funny. Luigi is one of the most charismatic character I have had the pleasure of playing with for a long time, with his fumbling around and little noises, “h-h-h-hello?” I couldn’t pull the smile off of my face whenever I turned my 3DS on. I always was hoping that around the corner I would get to see Luigi handle some terrible situation in another funny way.

But what would a game sandwich be without the meaty greatness on the inside? Luigi’s Mansion was about catching ghosts and that hasn’t changed. The objective of Dark Moon is to go to all five of the new mansions to collect Dark moon pieces that way the ghosts can go back to normal and to complete and area you have to complete missions. Unlike the original game you are not always exploring around one mansion, instead you have a set stopping point for a mission in which E. Gadd zaps you back to the laboratory so you can take a break before heading back into the haunted zone. There are some missions which can be a slight drag in the gameplay, I did not really enjoy the missions where I had to escort toad around the entire building in search of a pixelator they could teleport through. They come off as really annoying escort missions and the toad AI can be incredibly stupid at times, you can’t go up stairs too fast or they get stuck, if you run to fast they might get scared and stop. It really brings down the fun pace of the game at times but it doesn’t make it a game breaking experience.

Catching ghosts is pretty similar to the last entry, you have to try to push your circle pad in the opposite direction that the ghost is moving in order to lower their health and if you can hold onto them long enough you can zap ’em for a big chunk of their life. The game really does a good job with this system too as it starts out players with a ghost or two every room and progresses to ghosts that have complicated catching techniques such as avoiding all of a ghosts projectiles while sucking them up or trying to light them on fire so you can remove them from their disguises. The other great thing about the combat is that it is not always fast paced, instead of keeping you constantly on your toes there are battles where you have to think about how to defeat the ghosts. These battles I can only compare to point and click adventures because it goes by the classic point and click formula; understand your surroundings, check the items that make sense and use those items to solve the puzzle. 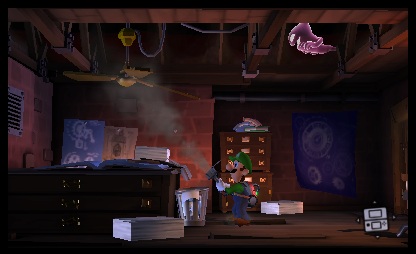 There are also collectibles just like the original game such as jewels and boos. Each level has a boo hidden within the nooks and crannies of every room and there is a total of 13 gems hidden within every mansion of the game as well. Some of these will be easy to find but there are some that won’t even appear with a simple flash light and vacuuming of a room. There is a new gadget to help with this called the dark-light which makes objects that the boos have hidden reappear.

Dark Moon is also really creative in the way they show off their levels and especially the boss fights. Instead of just fighting ghosts in this sequel Luigi has to fight mummies, knights, giant ice monsters and more! This is all thanks to the addition of possessors in the game  who can take control of physical objects of beings and control them to their will. The environments are really cool as well, as you are not stuck to one mansion in this game you go through many horror tropes within every mansion but not in a bad way. It’s actually pretty fun to see how Next Level Games designed each of the mansions because of how fun they are to look through, the first mansion is just a beginner mansion and brings back a lot of the things that made the original Luigi’s Mansion great but after that mansion it really expands into it’s own. You will venture into the forest of living plants where you can be eaten alive or into the abandoned winter mine where you might freeze to death.

The multiplayer is actually a really fun addition into the series as well. Most of the time I played locally with my friends but the online for the game is actually really enjoyable. ScareScraper is a totally different mansion is a totally different mansion that can be viewed from within E. Gadd’s bunker where you can go into to just train your ghost hunting skills or you can go in with friends to try and collect some new ghosts for your vault. There is a variety of four different modes, hunter, rush, polterpup and surprise mode that take place within a 5, 10, 25 or infinite level mansion. Each of these modes usually consist of everyone running around frantically searching for every ghost within the level before the timer runs out or simply finding the exit before the time runs out. This can cause mad chaos as everyone is running around yelling that a ghost has sucked them up and they really need a teammate before they die but everyone is at the other end of the mansion or they are stuck in a fight as well and it only becomes more fun the more chaotic it gets. 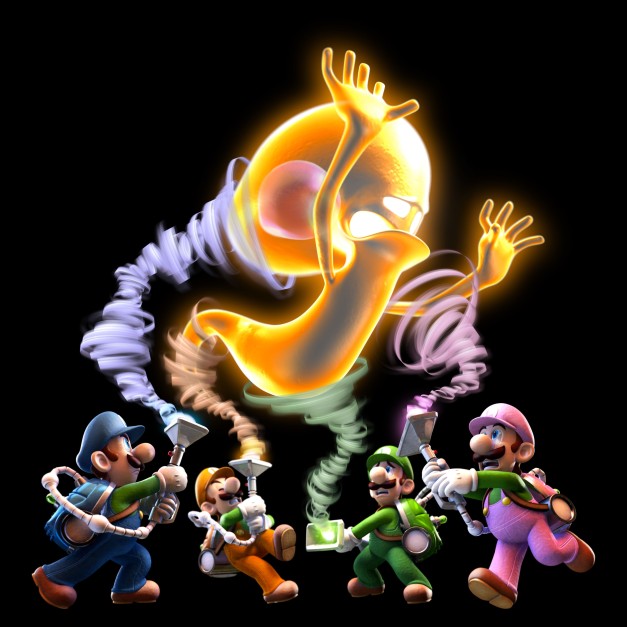 Luigi’s Mansion: Dark Moon is one of the best games to come out of the Mario franchise for a while and it is much needed as I was beginning to lose my hope for the series. Luigi has also become one of my favorite Nintendo characters because of how much character he has throughout the entire game. For people who loved the original game there may be little things that bother you about the new game, just the fact that it isn’t the original really, but Dark Moon stands on its own as a great game.I hope that we see more of this coming from Nintendo and I would gladly take another Luigi’s Mansion within the next couple of years, I don’t care what console it is on.