Ever since the Nintendo DS was released Nintendo craved the attention of casual gamers, hoping that somehow an audience of gamers who play every month or so would turn out to be their money maker. They ended up going the right direction with games such as Brain Age and Nintendogs, not to mention their motion console the Wii ended up selling big numbers that led to Nintendo’s current success today. But there were other competitors that tried to rise to the ranks of the cute puppies and our sensei Kawashima that fell down the steps of bad sales. Elite Beat Agents was one of those games that sadly took the plunge of trying to appeal to casual gamers but only to find that they had been targeting the wrong audience the whole time. 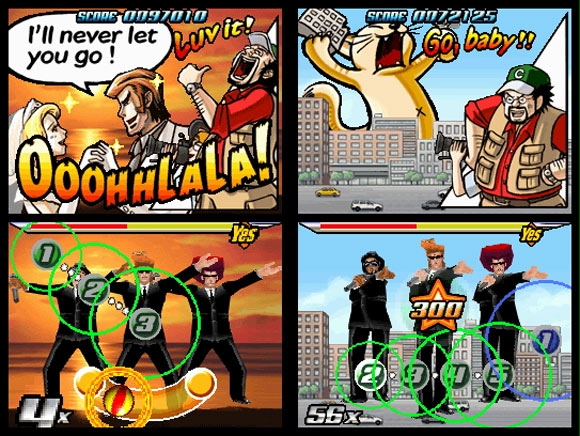 Elite Beat Agents is a game about a secret government agency that is responsible for the happiness of people all around the world and when someone cries out for help or is in a crisis the Elite Beat Agents are dispatched to save them!The Elite Beat Agents are no ordinary branch of the government though, when someone needs help they begin to dance to pop music to cheer them on! While this may be one of the weirdest ways to help someone in a crisis, it is definitely one of the most entertaining! On the lower screen of the DS the player must tap, slide and spin buttons to the beat of the music playing and depending on how well you keep the rhythm the situations result changes. That’s all there is to it, it really is very simple but in the end you will discover a fun experience that will give you hours of gameplay.
Elite Beat Agents went on to win several awards including the best DS game of 2006 from IGN and later on considered the best DS game of all time from Nintendo Power.